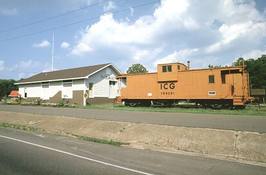 The project began in 1985 when club members and city officials reached an agreement giving the Lions Club a ten year lease on the building. The depot had begun to deteriorate after it was abandoned by the Illinois Central Railroad in March of 1982 when rail service was discontinued. It was further damaged during the 1984 tornado and the city had originally planned to remove it.

One of the first interior projects was restoring the main floor and creating a meeting area. Outside the depot, a flag pole was erected and the area around the building was landscaped.

In 1988, with the assistance of Bill Knight, an ICRR executive and former Water Valley resident, a caboose was obtained from Centrailia, Illinois, and brought to the end of the line at Coffeeville. In preparation for its arrival in Water Valley, an IC section gang from Clarksdale laid short lengths of track adjacent to the depot.

The cost to bring the caboose to Water Valley was $2800. Some of the funds had already been raised, but the remainder of the money came from the donations of residents and business people watching the caboose being moved into place. On the same day, an abandoned banana car from the old shop yard was placed beside the caboose.

Since that time, many additional improvements have been made. Steps and a connecting deck were built between the depot, caboose and banana car. Later the deck covered. Heating and air conditioning were installed and a security system added. Even though most of the work has been done by volunteers, over $35,000 has been spent on the renovations.

In 1997, the Yalobusha Economic Development Foundation purchased the Bruce Gurner Collection of Railroad Memorabilia which is being housed in the museum.

Also on display are other railroad items, photographs and documents of historical interest. Many of these came from the families of former IC employees and others with an interest in preserving Water Valley's railroad heritage.

The Museum is an ongoing project under the direction of the Water Valley Casey Jones Railroad Museum Committee. Money is desperately needed to preserve and maintain the building, the current collection of memorabilia and to provide for future growth.

Tax deductible donations can be sent to Water Valley Casey Jones Railroad Museum, 105 Railroad Avenue, Water Valley, MS 38965.  Even the smallest donations or purchase from the museum shop is appreciated.